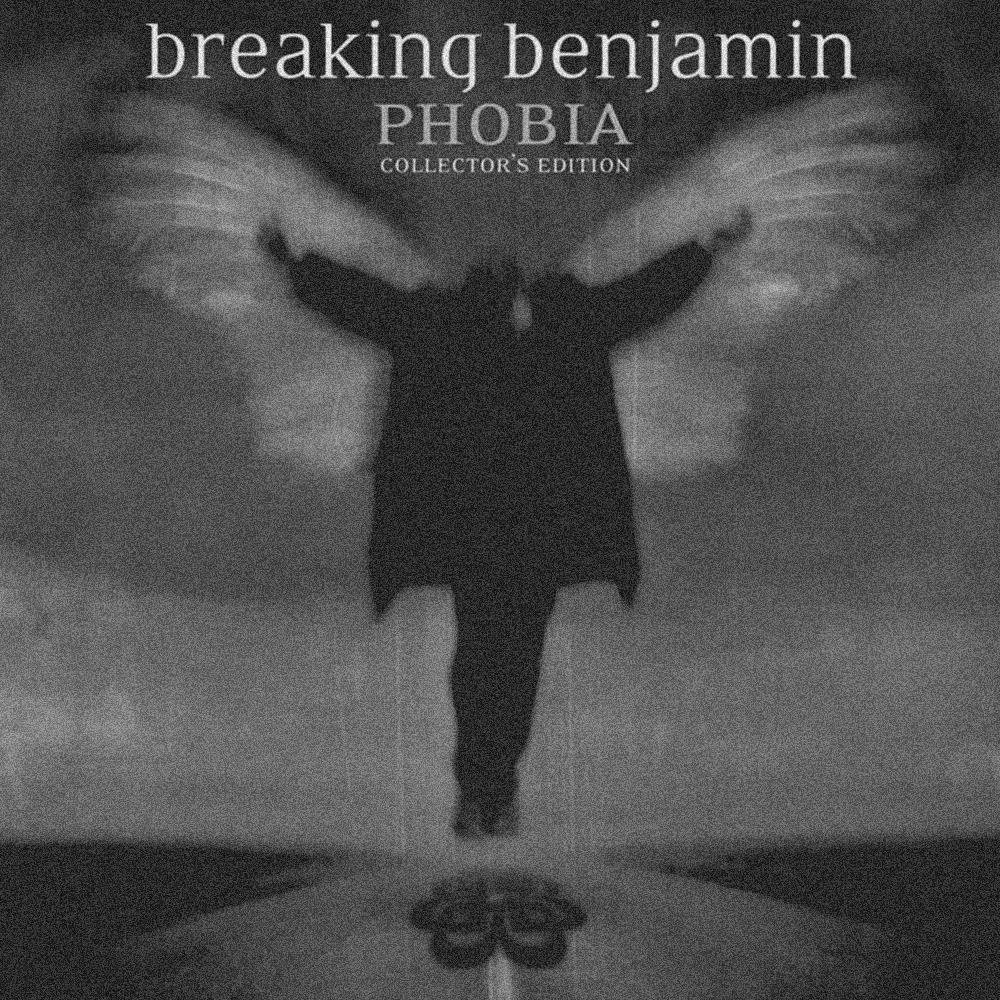 Today I will be reviewing BB’s 2006 hard rock release: “Phobia”.

The soundscape created by the first song on the album captures the mood of the entire work: bleak, emotional and (at times) irrational fear. A scene is painted where car doors can be heard slamming and the sound of a plane taking flight reverberates throughout the setting for this scene: an airport terminal. This is a reference to frontman Benjamin Burnley’s admitted fear of flying. The minute-something long track leaves the listener feeling worse for wear and somewhat unsure in terms of what to expect. The strings plucked blend seamlessly into track number two and the static which prevails this album opening lends to the aforementioned sense of confusion and lethargy.

Chunky riffs lend the song a great sense of rhythm and the vocals wretch and echo as they should. Admittedly, I had only recently taken notice of the layered vocal delivery during the third and final chorus. This section truly shines for me. Light and airy harmonies support the gruff and deep tonalities of the song’s centrepiece. Listen for the “Aaah-aah-ah” in the background during the last chorus. It’ll give you goosies.

To me, this isn’t anywhere close to BB’s best. Sure, the song oozes character and captures the stylistic essence of the band—but I don’t know. Other songs in their discography deserve more acclaim, in my opinion.

Unfortunately, my wife has an aversion for this song. This probably has something to do with it being being played on the radio so damn much.

“Breath” is a stellar track. Burnley’s emotion can sincerely be felt and his delivery during the verses leave an indelible impression. I guess that is why I like this song so much—it is memorable.

The song speaks of longing for what was and fighting for something new. It is a track which finds a fine balance, lyrically. Both the past and future are considered here:

The guitars are dedicated to a strong supporting role, with vocals steamrolling centre stage. If you don’t feel something during the chorus, I don’t know if we can be friends.

I would argue that you cannot listen to “You” in isolation. “Breath” and “You” form a pair that is hard to deny. Both songs are emotionally-charged and littered with introspection (more so in “You”). These tracks go so well together that I’d recommend treating them as a single entity [hence the same score].

Burnley lays his flaws down in track number four. The lyrics come across as heartfelt and genuine; which I like a lot. Moreover, the ‘feel’ of the song is hypnotic. Droning drums and beautiful vocals leave one beguiled.

The guitar pinching during the verses deserves mention here—as it adds to the spellbinding nature of the song.

Open cards: “Evil Angel” is my favourite BB song, and has been for fourteen years. My bias is clearly showing, but I will do my best to provide some rationale.

I was fifteen in 2006 and was just starting to find my rhythm in high school. I went to a school that none of my primary school friends opted to go to, so I was light on companionship and heavy in weirdness. I was shy with strangers and extremely outgoing with mates—a strange, but pretty normal, dichotomy.

My cousin played track five from “Phobia” during a visit in 2006 and I was overwhelmed by it. A song captured my loneliness and desperation. A song vocalised my angst (which had been brewing for years). A song made me feel content in a time where I was uncomfortable and largely living on autopilot.

The song exemplifies all that I love about music. It is an avenue for decompression, internalisation and introspection. The lyrics speak to my lifelong cynicism (“…nothing but lies and crooked wings”), apprehension (“Nothing could be worse”), and need to believe in something (“You are the faith inside me”).

I never thought I’d get the chance to write about this song, and there is still much more to say. But I will save that for another time. Just know that track five on “Phobia” retains these features for me; even as I endeavour headlong into my thirties.

Uncertainty. Disorientation. Yearning. “Evil Angel” has it all.

Although this song may seem like generic radio rock, I have a profound love for this song. I guess you could chalk that up to the pessimism on display.

Catchiness isn’t something you often find in alternative metal / hard rock, unless a given song was designed for airplay in mind. Track 6 is both catchy and noteworthy, as it soars during the chorus and rarely lets up. Feelings of hope, sentimentality and remembrance are central here.

The only weak point I can find is that the writing is weaker than some other songs. Even that isn’t saying much, as the instrumentation and effort on show are both top notch. This track is a sedative that helps me come to terms with my own self-destructive tendencies.

Singer and guitarist Burnley sounds epic on this song, but something feels ‘off’ about “Dance with the Devil”. I think this is where the generic label attributed to this album ring true for me. The song never got its hooks in. Furthermore, the verses feel slow and plodding instead of rhythmic and galloping. Emotion and engagement are—sadly—lacking.

I much prefer the “Aurora” (2019) version of this song. It features ex- Three Days Grace frontman Adam Gontier and sounds infinitely better. Give it a whirl!

This is the song I always skipped when I was younger. Admittedly, it has grown on me since then; but not by much. The track appears phoned-in and feels like a million other alternative metal and hard rock offerings on the era. In addition, the objective of the song remains absent after countless listens. What is Ben trying to say with this? If you have the answer(s), please let me know!

Another twosome is here! Tracks 9 and 10 go together like cheese and wine. Like peanut butter and syrup. Like boerewors and tomato sauce. You get it; they pair relatively well.

On the slower side, track 9 exudes emotion and exhibits Burnely’s love for his craft, deftly. Contrast again rears its head, with lyrics portraying the simultaneous need to be left alone and the fight for others. It is all very dramatic and mushy—just the way I like it!

The chorus on this track is one of the strongest off the album and the vocal delivery is near-perfect. Listen to this one and do not skip the proceeding track!

Despite tracks 9 and 10 also being a couple, the latter is a smidge better. A soldier is on his way to the afterlife in this impassioned song.

My heart breaks every time I hear “Unknown Soldier”, without fail. Ben’s performance is rock solid and the lyrics are gut-wrenching. This is an example of what BB does so well: blending rough edges with smooth foundations. The “rocky” bits perfectly compliment the “singy” ones; in an interplay I’ve rarely seen from any band in the scene.

The chorus on this track is the BEST off the album and the vocal delivery is godly. Save a spot on your playlist for this one!

Track 11 has a beautiful sense of melody. The verses lead seamlessly into the chorus and provide a powerful message of both resentment and triumph. A tinge of aggression ensures this subject matter is delivered to the listener in earnest.

Musically, the song ties in well with the rest of the album. Guitar pinching, soaring refrains, lyrical depth. It is all here.

Honestly, I don’t have much to say regarding song number eleven; arguably because it treads ground covered in prior songs. I, for one, don’t see that as a bad thing.

I’m not a fan of song twelve. It comes across as whiny at times, which is not in the interest of this thematic album. Musically, it falls short of the peaks reached prior to it and leaves me hollow and wanting.

Ideally, the lyrics portray the ‘end’—a fitting climax for the effort, for sure. But damn, not even a pretty piano can save this song from itself. A low point, admittedly.

The soundscape presented in song one continues here. Tension and fear erupt into instrumentation. These coalesce as a muffled announcement is made over an intercom system. Strings fittingly mimic the sounds of a plane taking flight. Good atmosphere building. A suitable end to an album rife with themes of frustration, atonement and detestation.

“Phobia” (2006) is a curative as much as it is an essential album. As someone who is prone to feelings of anxiety, they seem to melt away when I listen to this piece of art; and I will always cherish it for that. This album has undeniable history for me. It got me through rough spots in my development and I couldn’t recommend it enough.

iThere are no comments

Begin typing your search above and press return to search. Press Esc to cancel.